Want our Alerts FASTER than everyone else?

Serious traders know that every second counts in these markets. Text messages are about 7x faster than email. Get an edge on other traders by receiving our FREE instant Stock Alerts ahead of e-mail subscribers by subscribing to our Mobile Alert System.

We promise never to share you number with anyone else. Standard text messaging rates may apply.

NWPN is our New Cannabis SUB-PENNY poised for an EPIC Post-Election Reversal Rally! Read why…

And there may be no better Sector than the Red Hot Cannabis space as the recent US Election has put it back to the forefront of Wall Street’s radar!

November 3rd may have had it’s controversy in the Presidential Election, but the real story here was that Cannabis made a clean sweep in every single State ballot initiative….

The biggest win here was obviously New Jersey – home to nearly 10 MIL Americans – and expected to create a domino effect in the Northeast which will include the biggest prize: NEW YORK!!

And all of this bodes well for Today’s New Alert, a severely UNDERVALUED, UNDER-PRICED, and OVERLOOKED Cannabis/CBD Company who has already promised to capitalize in these newly legal States!

WE ARE ISSUING AN IMMEDIATE ALERT ON NWPN!

What do you get when you mix Cannabis and Science?  PROGRESS.

The positive effects are indisputable. Medical Marijuana has helped those with PTSD, eating disorders, glaucoma, cancer, nausea, seizures, and so much more.

35 States have now legalized Cannabis for Medical use and CBD is now Legal NATIONWIDE and forecasted to see $1.6 BIL in sales!

And this brings us to this week’s New Alert – an ambitious Bio-Pharmaceutical company looking to bridge the worlds of science and cannabis….

The Now Corporation (NWPN) is focused on the research, education and production of Scientific-Grade Cannabidiol (CBD) from hemp and Tetrahydrocannabinol (THC) to be used for medicinal purpose, while focusing on pursuing business opportunities in the growing medical and recreational marijuana sector.

NWPN has already been making major strides with potentially BLOCKBUSTER Acquisitions and Joint Ventures over the last few months. And it shows…

Since word got out, NWPN began it’s Historic ascent to New 5 YEAR HIGHS this Fall! 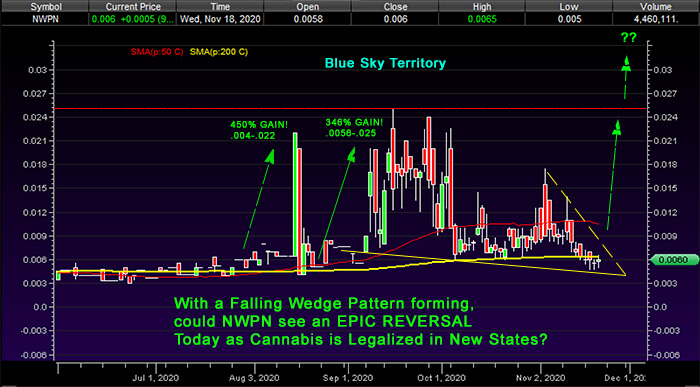 But even with it’s recent PARABOLIC move – NWPN is now back at those dirt-cheap SUB-PENNY prices it initially rallied from TWICE.

And with a Falling Wedge Pattern, an EPIC Reversal Rally could be IMMINENT.

A break of it’s recent high of .025 into “Blue Skies Territory” would effectively give this stock UNLIMITED UPSIDE POTENTIAL!

So aside from the Election results, what could propel NWPN back into uncharted territory?  Let’s dig in…

NWPN – BRINGING SCIENTIFIC-GRADE CBD TO THE MASSES
NWPN is a bio-pharmaceutical research company with a mission to improve the health and wellness of patients worldwide by building a dynamic, innovative and forward-looking research, development, education, and testing company serving the fast growing cannabis industry across the US and Canada with Scientific-Grade Cannabidiol (CBD) from hemp and Tetrahydrocannabinol (THC).

The company is dedicated to advancing the study of the medicinal use of CBD and other cannabinoid molecules and seeks to develop cannabis-derived therapeutic products backed by strict and ethical scientific research.

This includes, but is not limited to, food, paper, and textiles derived from Hemp.

NWPN has the ability to grow and analyze hemp seed genetic variability, the source of CBD, and its relationship to potency, which will aid the pursuit of effective dosing that will be required for maximal health benefits.

NWPN has created agreements with top research scientists from major Universities and have utilized their existing labs to perform expensive research using cannabinoid compounds which are in cannabis plants.

From the research, the company will be able to publish research white papers that will contain credible data from these research laboratories.

As a result, the information that the company publishes will start to establish increased credibility in the industry, and will allow the company’s products to be prescribed by physicians since they will be able to access the information in their databases.

These studies will answer many questions and stop false data and rumors about CBD/THC derived from cannabis, and the effects on the human body.

NWPN desires to have an FDA approved medicine that focuses on nausea and other ailments. With FDA approval, it will be available for pharmacies to dispense, and will be on the approved list for insurance companies to pay for.

Ultimately, NWPN will pursue patenting the compound on a molecular level, similar to Pfizers patent on the drug, Viagra.

How NWPN Stands out Above the Rest

NWPN will have a scientifically tested product while existing products that are available on the market may not be safe.

For example, what is the safe dosing for CBDs in the human body?  What is the effectiveness rate when humans consume CBD, and how much can a human take before it becomes toxic to the body?

The Federal government, along with State governments must find out this answer before deeming it safe. The company’s research does not start at the plant, they will also research air, soil, and water, from a seed genetic level up to a mature plant.

NWPN INKING BLOCKBUSTER DEALS
If you could’nt tell, NWPN is not a company to simply rest on it’s laurels!  Let’s analyze some of the company’s most recent deals…

Hollywood Diagnostics Center is a leader in the medical diagnostics field while performing over 30,000 diagnostic procedures annually!

The goal of the imaging data analysis is to detect correlations between brain activation in subjects when either non-tasked or tasked activities are performed during the scan with CBD compounds present.

It also aims to discover correlations with cognitive states after CBD compounds are introduced to the subject.

PARTNERSHIP IN THE CBD BEVERAGE SPACE

On Sept 2nd, NWPN announced they are now the Largest Shareholder in Transglobal Assets Inc.with 26.8% ownership!

The company is extremely interested in Transglobal Assets’ Monster Elixir subsidiary both as an investment and for additional synergies.

Monster Elixir Inc. will provide customers with a wide range of high-quality CBD products from its organically grown Indoor and Outdoor gardens. 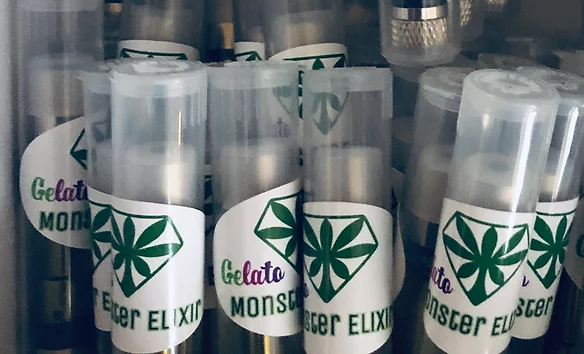 🌿 Infused Olive Oils: for all of your edible baking needs, it has Olive Oils Infused with CBDs, also sold in bulk or retail.

🌿 Distillates by the cartridges: Indica, Sativa and hybrids will be available.

NWPN and Transglobal will offer a unique arrangement of CBD Edibles, from hard candies and gummies to pound cakes and pies made from scratch.

These fine CBD products will be sold at local Dispensaries and other retail outlets, including at Monster Elixir stores in the near future. 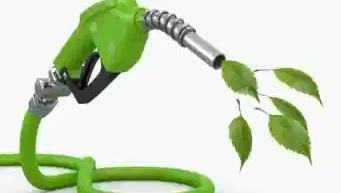 Back in January, NWPN announced a pilot program for producing derivatives from Industrial Hemp for biodiesel fuel in North Dakota.

Industrial hemp is perfectly capable of fueling the modern world without displacing food or adding to the Greenhouse effect. After almost 150 years of drilling and fracking, fossil fuel experts believe oil production could be nearing its peak and the hunt is on for a viable replacement such as hemp derived biofuel.

The NOW Biodiesel Pilot Program forms part of the existing joint venture agreement for the cultivation of Industrial Hemp to be grown near Grand Forks, North Dakota. For the 2020 grow season, the pilot program will consist of 400 acres and, upon a successful growing season, the following years will then expand to include over 1000+ acres.

Hemp Biofuel is looking like an attractive alternative to crude oil and NWPN could soon get recognized for its pilot program by producing derivatives from Industrial Hemp for biodiesel fuel in North Dakota!

THE BOTTOM LINE
NWPN may truly be the most ambitious CBD/Cannabis Stock we’ve ever come across.

From Scientific-grade CBD approved by the FDA and incorporating Diagnostics to CBD products like Beverages and Oils and even Hemp-based Biofuel – this company has it’s hands in all facets of the industry.

The company is even looking to create an organic CBD nausea drug for SpaceX and NASA to provide astronauts on extended missions – and eventually to Mars!

Basically, NWPN is “Out of this World” and a break of recent highs could give it UNLIMITED UPSIDE!!!

But it’s not out of reach…..especially as it trades at just SUB-PENNY PRICES!

The question is: Will you be on board as NWPN attempts to Breakout of this Wedge Pattern and on to uncharted “Blue Skies Territory”?

Make sure you put it on your screen RIGHT NOW and Follow on Twitter for Updates + Play-by-Play! 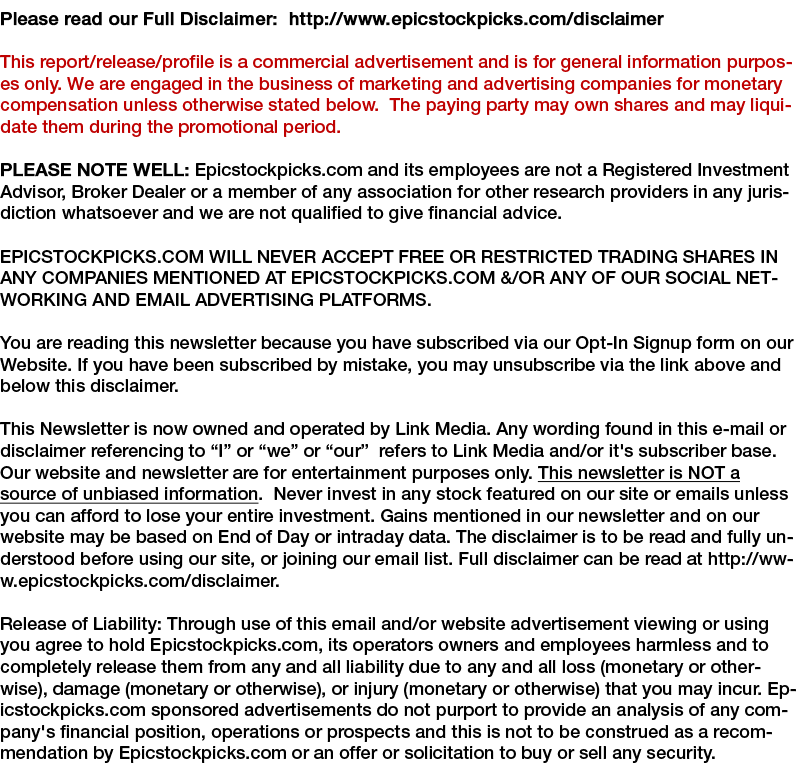 We encourage all to read the SEC INVESTOR ALERT before reading our Newsletter. 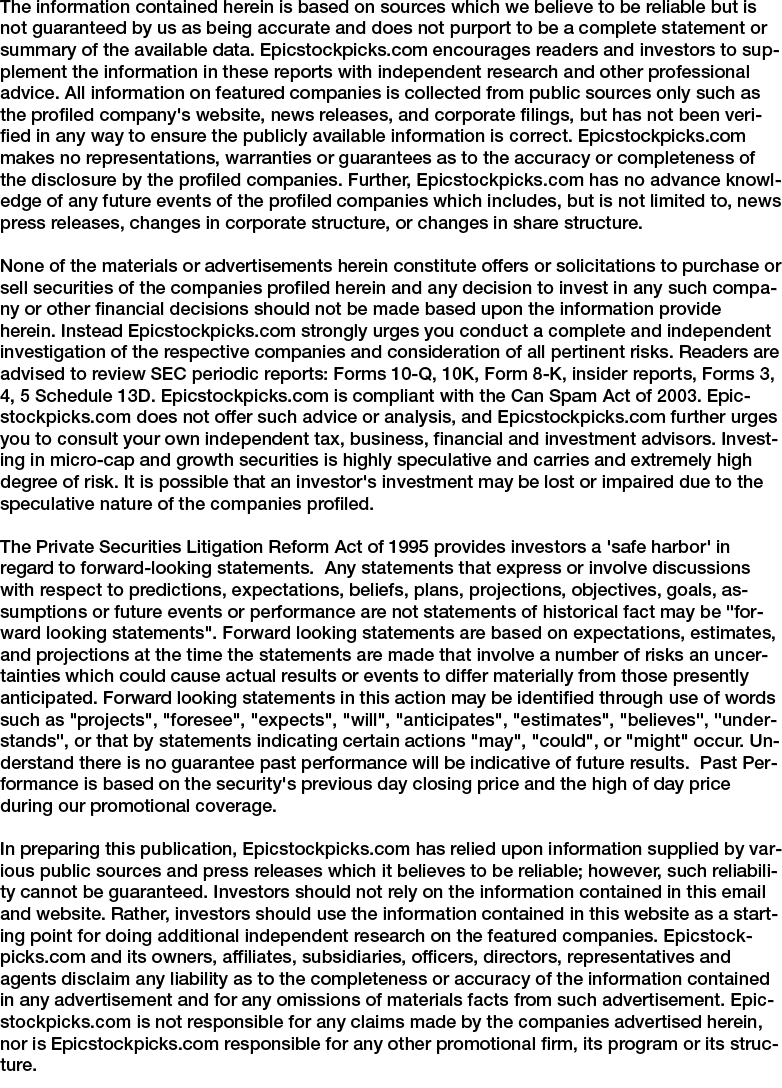